Book Review: A Silence of Mockingbirds

WHEN I DISCOVERED THAT the setting for Karen Spears Zacharias' memoir, A Silence of Mockingbirds: The Memoir of a Murder was Corvallis, Oregon, I had to get my hands on a copy. Corvallis is where I spend a good deal of my daytime hours. In other words, it's where I work and is just a few miles from where I live.

Of course, like any good book, once I got started, it was difficult to put down.

When Sarah Brill was a teenager, she lived with Ms. Spears Zacharias (heretofore referred to as "Karen"). Karen loved Sarah as much as her own children and sought to be a positive influence in this young woman's troubled life. Eventually, Sarah launched out to find her way in the world. She married David Sheehan, an engineer at HP and the two settled in Corvallis. Not long after, she gave birth to a daughter, Karly.

Years passed. One day, a providential reunion brought Karen face to face with Sarah. When asked about Karly, Sarah was evasive and would only say, "She's dead." Desperate for an explanation, Karen's training as an investigative reporter took over and the next thing she knew she was rifling through court documents, scheduling interviews and listening to a hysterical 911 tape.

Karen's passion for the truth is evident throughout her book. Leaving no stone unturned, she seeks and finds answers to the myriad questions inevitably raised with such a complicated set of circumstances. The reader is right there with her while the jury hears testimony that will eventually convict the perpetrator of a horrific crime.

You'll have your own opinions about the complicity of Sarah in the murder of her daughter. You'll feel Karly's father, David's pain and frustration. Once you're finished with the book, you'll still be haunted by it and grieve the senseless loss not only of dear sweet Karly but all victims of child abuse.

Karen tells of David's efforts to memorialize his daughter. At Avery Park, just a few blocks from where I work, is a plaque attached to a lively play structure built in Karly's honor. The setting is beautiful. Green grass, bird song, tall trees swaying gently with the afternoon breeze. 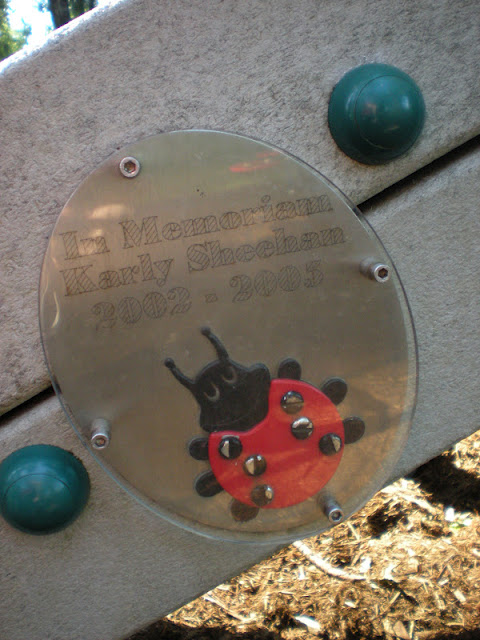 Without being preachy, the book is a wake-up call. All of us need to be aware of the signs of child abuse. And we need to be brave enough to report anything that looks amiss. And we need to have diligent lawmakers and experts protecting the most vulnerable citizens. 'Nuf said. Thank you for listening.

You can see photos of Karly and her father and read more about the author by going to: http://karenzach.com/
Posted by GRACE PETERSON at 9:17 AM