Book Review: The Woman Who Wasn't There


I LIVE ON THE WEST coast, in a smallish town in western Oregon--about as far removed from New York City as one could get and still call themselves an American. On the morning of September 11, 2011, I was just about to pile the kids into the car for school when my neighbor, whose son was riding with us, yelled over something to the tune of, "Go back inside and turn on your TV. The World Trade Center collapsed."

That was how I learned about the terrorists' attacks. Like many people, I found myself glued to the TV as talking heads reported on every facet imaginable about this horrific tragedy.

A few weeks later, as the shock wore off, I got back to my life and didn't give NYC too much of my gray matter. I was busy.  That's not to say that I didn't feel badly for the victims, I was just too far removed to be seriously affected. 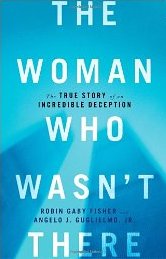 Years passed.  Although news reports showed footage of a new building  being erected at ground zero, for the most part I was ignorant of much of what happened post 9/11.  I was certainly ignorant of the ongoing activity surrounding the survivors and families. I'm pretty sure I'm not alone.

It's rare for me to read a newly released book but when the library alerted me that the reserve copy of The Woman Who Wasn't There was available, I grabbed it. And I devoured it.

I haven't seen any of the author interviews but I would venture to guess this book was written, at least in part, for people like me who are far removed from NYC and 9/11. Reading it was like being there, front and center. But not only was it an engaging account of what happened, it was also an illuminating window into how human nature works.

While there was a tremendous outpouring of support for the victims' families, the hundreds of people who were in or near the towers and survived felt denied and forgotten. The post-traumatic stress they were suffering was unimaginable, made worse by the fact that they felt so guilty for being alive while so many perished. Eventually they banned together to form The World Trade Center Survivors' Network.

Enter Tania Head. Posed as a survivor who miraculously limped down 96 floors and escaped Tower 2 before it collapsed, she also led people to believe she'd lost her husband in Tower 1. Her story was so tragic and her personality so engaging, she quickly made friends, gained trust, took the helm and became the capable voice of the Survivors' Network.

Authors Robin Gabby Fisher and Angelo J. Guglielmo, Jr. do a stellar job of chronicling Ms. Head's journey from her first tentative steps into the group until the final unraveling of her deceit 5 years later.

Tania Head was no dummy. She did her homework and must have spent hours crafting and honing her tall tale.  Despite the discrepancies in her story, people believed her because they needed her. And they didn't want to be skeptical of someone so dedicated to the cause of helping others.

It's easy to feel empathy for the survivors. Perhaps some won't or can't feel sympathy for Ms. Head but I do. She must have endured some monumental difficulties earlier in her life to craft such a meticulous ruse. Mostly though, I'm so glad that the survivors had each other to lean on after learning they'd been so supremely duped.

I always enjoy reading a book that illuminates human nature and serves to unite us as a society.

I think everyone should read this book if for no other reason, for the survivors.

My apologies for such a lengthy post. As always, thank you for visiting. Please feel free to comment.
Posted by GRACE PETERSON at 9:52 AM