Way, waaay back in December of 1978, I had just turned 18 and while trudging my way through high school, I worked a part time job at a little fast food joint on 178th and Stark Street in southeast Portland. Nowadays, most of that tenure blurs into amorphous recognition. But one night stands out--the night when the lights went out. As lead staff person and having never encountered such a quandary, I felt a weighty responsibility. My first decision was to lock the front door as patrons, averse to eating in the dark, gathered their things to leave.

A bit later someone from the convenience store next door walked over to tell us that a plane had crashed about a half a mile away on 157th and Burnside, knocking out the electricity. As I recall we did our best to tidy the dark kitchen, then closed up and went home.

This past December marked the forty year anniversary of this tragic event that left ten people dead and all of Portland affected in some way.

I didn't care much about news events in those days so I was unaware that litigation ensued thanks to the family of one survivor, Elizabeth Andor. She was a three year old girl at the time and lost her parents and sisters that infamous night. Her devastated extended family decided to take on United Airlines.

Crash Course: Accidents Don't Just Happen details not just the crash and all of the extenuating circumstances but the ensuing legal battles that culminated in a disappointing Oregon Supreme Court decision years later. The author, Julie Whipple is the daughter of attorney Stewart M. Whipple, co-attorney representing Miss Andor.

At first I worried that I would be either bored or overwhelmed by the legalese of such high profile and convoluted litigation but Ms. Whipple's book kept me interested until the very end, not just because there were so many factors that played in to the tragedy but more so because she never loses focus of the real story--the people, their pain and their eventual healing.

Blogger Matt Camp has devoted a blog post to the crash of United Flight 173. With tons of compelling photos of the wreckage, even more gripping was reading the accounts of so many who were either on the plane or the ground and affected by the crash. Some, including Ms. Whipple in her book, have suggested a memorial be erected at the 157th and Burnside crash site to remember those who were lost.

Curious, I had to see for myself so I enlisted Google Street View. Not surprisingly, the area has changed much in forty years. The tracks of the light rail have widened the once comparatively narrow two-lane Burnside Street. To the north where most of the torn fuselage came to rest, a big apartment complex now sits.

But the area to the south remains a vacant lot as it was in 1978. There is a makeshift "No trespassing" sign posted in the center of a field of mowed grass. Perhaps the owner understands the sensitive and sacred nature of this place. 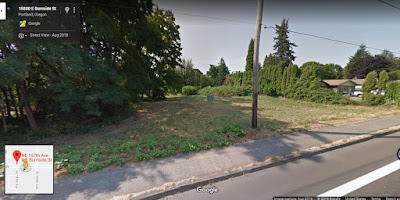 If you were living in Portland in late 1978, do you remember the crash? Either way, Crash Course is a worthy read detailing an important piece of aviation history.
Posted by GRACE PETERSON at 2:13 PM