A few posts back I mentioned that my sister and I had been reading our mother's journals. I promised to share some of entries here. Interestingly the first one I want to share has to do with a current hot-button topic of controversy--vaccines.

My kids are grown up now and I'm not worrying about the safety of vaccines but even back in the 1980s and 1990s I was nervous about pumping my babies full of synthetic antibodies or whatever they were. Admittedly I thought very little about the alternative--my children actually catching the virus they were going to be protected from.

Today's current first-hand unfamiliarity with the symptoms and long-term consequences of diseases such as measles, mumps, rubella and polio could be--at least in part--what makes parents hesitate. 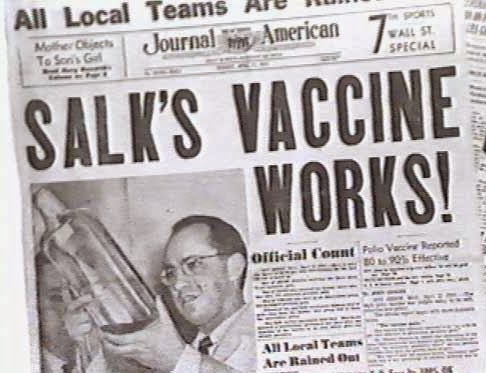 My all-time hero is Dr. Jonas Salk. All of my children benefited from his discovery of the Polio vaccine. Before that, summers were filled with fear because the disease was epidemic. Mothers refused to let their children out of the yard and kept them away from swimming pools, playgrounds and anywhere children congregated. Polio didn't seem as prevalent during school months. Everyone knew someone who was a victim. In my case, I knew the minister of our church who was a young father. He was left with partial paralysis.

This is all she wrote on the subject and of course, her words belie her actions as a mother. Despite that I can't read it without thinking of the little me, healthy and robust running around in the sunshine. How blessed I am--how blessed we all are--for the benefits of good science.