I'VE NEVER STOOD FACE to face with Cami Ostman but we "met" several months ago when I followed up on a lead for a potential writing project. Cami was issuing a call for submissions on women who've experienced extreme religion. Fast forward to now and I'm thrilled to say that Cami liked my essay and it will be published in an anthology due out next spring. I'll post more on this later. 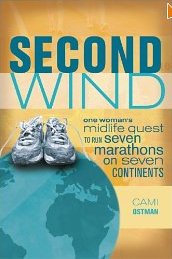 With a pile of "to read" books stacked on my nightstand, I finally read Cami's fascinating memoir, Second Wind: One Woman's Midlife Quest To Run Seven Marathons on Seven Continents (Seal Press, 2010). I'm glad I did.

I was once a fairly dedicated runner. My most extravagant jaunt took place in the middle of a blue Caribbean ocean as I propelled my then-thin body around the uppermost deck of a Princess cruise ship. But I've got nothing on Cami.

In 2001, after a failed marriage, Cami began questioning many of the religious beliefs she'd grown up with. Struggling with deep depression, she found that running offered a way for her to clear her head and find her way.

It takes a tremendous amount of physical as well as mental and emotional endurance to run 26 miles. Sore muscles are normal and expected. A marathoner must summon inner strength to override the body's desire to hang it up. Crossing the finish line affirms the runner's tenacity and can't help but build her self esteem.

Not only does the reader go with Cami to seven continents to tackle these tremendous challenges, but we go inside her head to understand what drives her, what hinders her and ultimately what she learns about her life. She calls it a "Vision Quest."

I liked the way Cami personified her many-faceted psyche. Along the way, we are introduced to the "Bitch," "Inner Wisdom," the "Warrior" and the "Princess." All are vital in helping Cami succeed. And all of us have these same parts of ourselves whether we run marathons, tend a garden, change diapers or help the homeless. You don't need to be a marathoner to "get" Cami's book, to hear the message and apply it inwardly.

Cami has a Facebook page with lots of cool photos of her travels and triumphs. As a licensed therapist, Cami's website and blog reveal her passion for helping others achieve their best as she has so admirably done. You'll like this book.

Posted by GRACE PETERSON at 8:56 AM